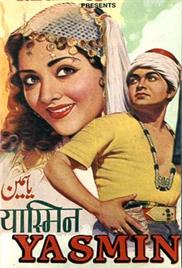 A powerful and princely Sheikh lives in 18th Century Persia, makes a living renting out properties, and recovering taxes and dues on them. He lives in a palatial house with his wife, Zubeda, and son, Ahmad. When Ahmad grows up, Zubeda notices that he is spending too much time with women in their harem, and wants his father to get him involved in their business. Sheikh accordingly instructs Ahmad to collect all revenue, which he does so. A few days later, Sheikh is informed that Ahmad has been spending time with a friend named Farid, and is romantically involved with a dancing girl named Yasmin. A visibly upset Sheikh accordingly warns Ahmad to mend his ways, give up on Yasmin and return home, where he has planned his marriage with Nadira, the daughter of Amir Qasim. Ahmad does return home, but refuses to marry Nadira, and runs away from home to be close to Yasmin, knowing fully well that Yasmin is connected with a group of gypsy thugs, who use her charms to lure wealthy young men to extract ransom. And Ahmad knows that his enraged father will also challenge him to a duel – a duel unto death – that will ensure a death in this family.