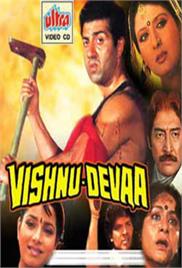 Young Vishnu, his younger brother, Devaa, live with their hardworking dad, a farmer, and mom a devoted housewife. Their lives are shattered when the cruel and wealthy land-owner, Thakur Shamsher Singh kills their dad, and brutally rapes and kills their mom. Vishnu swears vengeance, and kills some of Shamsher’s henchmen, and is apprehended, tried by a judge, and imprisoned. The Judge takes pity on Devaa and adopts him. Vishnu breaks out of prison, with the police hot on his tail, and takes refuge with Baba, an undertaker, who diverts the police. Vishnu grows up under Baba’s care, still thirsting for revenge. Years later, he comes across Shamsher, who now calls himself Sampat, and attempts to kill him, but Sampat escapes. Baba counsels Vishnu and advises him that in order to destroy Sampat he must first destroy his illicit businesses, which will cause a lot of financial losses. Vishnu does so. Vishnu’s life is enriched by the love of beautiful Paro, owner of a small restaurant. Meanwhile Devaa has grown up to be a Police Inspector, who also suspects Sampat to be behind a lot of illegal activities, but is unable to unearth any evidence to arrest him. Devaa’s love-life is the beautiful Sangeeta, who happens to be Sampat’s daughter. Sampat finds out that it is Vishnu who is behind his losses, and frames him for murder. Devaa is assigned the task of apprehending Vishnu. Will Vishnu be able to avenge the death and humiliation of his parents? Will Vishnu and Devaa ever come to know they are long-lost brothers? What will be Sampat’s reaction when he finds out that his daughter loves Devaa?