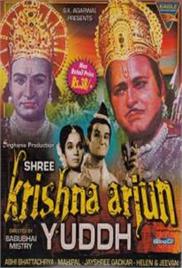 After thwarting a fatal confrontation between Bhagwan Shri Hanuman and Kuntiputra Arjun, Devrishi Narad, who had created circumstances that had compelled Bhagwan Shri Ram to take up arms against his chief devotee, Hanumanji, now sets about to create similar circumstances between Bhagwan Shri Kishan and Arjun. When Chitrasen inadvertently humiliates Gabal Rishi, Kishanji decides to behead the former with his Sudarshan Chakra. Chitrasen and his wife, Chitrangini, approach Indra Dev, and many others but no one dares to oppose Kishanji. Arjun, too, initially refuses, but changes his mind on Subhadra’s insistence, who ensures that Kishanji will not use his Sudarshan Chakra against Arjun. Kshatriya Dharam prohibits a warrior from attacking an unarmed opponent – though this had not prevented Arjun from killing unarmed Dronacharya, Bheesma, and Karan during the Kurkshetra. If the battle between Kishanji and Arjun does take place it will result in all round devastation – and may well see the end of not only Chitrasen but also Arjun himself – for no one can win in any battle against any Avtar of Bhagwan Shri Vishnu.