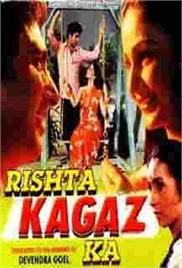 When Suman’s parents pass away, Professor Sharma decides to adopt her and includes her in his family of his wife and two sons, Bunty and Arun. His wife subsequently passes away, and Suman takes it upon herself to look after the three males. Suman is in love with Ravi Kaul, both want to get married, and with approval of Ravi’s mom and Prof. Sharma, a wedding date is set. However, on that very day Bunty gets killed in an accident and the wedding is canceled. Ravi travels to U.S.A. on a research scholarship, hoping to get married on his return. Then Arun gets into trouble with a local merchant who accuses him of breaking and entering his shop, but before the Police could be notified, Suman compensates the merchant with the conditional help of Ravi’s mom, and the Sharmas re-locate to Bombay. Subsequently, the Professor passes away, and Suman brings up Arun with the help of a taxi-driver, Hanibhai. Arun has now grown up, is now a Chief Engineer in Bhatnagar Constructions, he meets with, falls in love, and gets married to wealthy Aarti. Then things began to turn sour as Aarti dislikes Suman’s interference in their lives. Things get to a point when Aarti is forced to leave Arun, and in order to get her back Arun asks Suman to sign a document formally ending their relationship. The question remains, what were the reason(s) which compelled Arun to end this relationship, and why did Suman agree so readily?