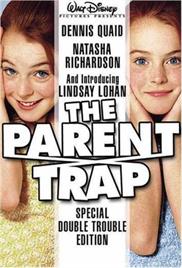 Hallie Parker and Annie James. They look exactly alike and are sisters. It would be awesome for you to be a twin, but what is it like being a twin without even knowing it? That’s what it’s like for these girls. Hallie is a cool, laid-back gal from California. Annie James is a proper rose from London. Annie has never met her father, and Hallie has never met her mother. When they get thrown into the Isolation Cabin, they uncover the mystery behind the ripped picture. They realize that they are twin sisters seperated at birth by their divorced parents, and they decide to switch places to meet the parent that they’ve never met. They also decide to get them back together. But then something awful happens that will wreck everything: their father is engaged to a beautiful, selfish witch who’s only after their dad’s money.