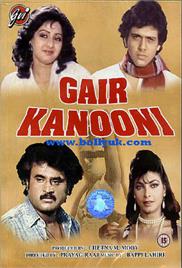 Officer Kapil Khanna was a strict enforcer of the law. In order to gain evidence against the local mafia Don D’Costa he seek ed favour from his underworld friend Aazam Khan a man with a golden heart. Aazam Khan was successful in securing evidence against D’Costa but the mafia got wise to it and before Aazam Khan could reach the law, D’Costa with the help of his friend Dalpat Dalal liquidated him. The blame of Aazam Khan’s death was owned by a petty driver Nathulal for a price paid by Dalpat Dala. Aazam Khan’s little son Akbar swore vengeance against Police Officer Kapil Khanna as he felt him responsible. Kapil Khanna’s wife delivered a baby boy in the hospital of D’Costa, so did Dalpat Dalal’s wife to a baby girl. D’Costa returned Dalpat’s favour by interchanging the two on Dalpat’s insistence. Kapil Khanna was enraged at this and he took to a legal battle against the hospital authorities. The court gave the custody of the little girl to Nathulal’s wife Banto who worked as a casual labourer in the hospital. Banto named the little girl Lakshmi and groomed her to become an ace pickpocket in time to come.