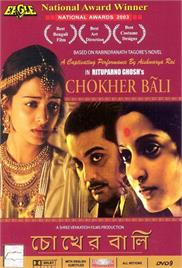 The book, Binodini, is the story of a young woman, who is left to her own devices when her sickly husband dies soon after they are married. She returns to her village and lives there for a couple of months until she sees one of her relations passing by there on her way to somewhere else. Binodini hails the woman and the two soon agree that it would be best if Binodini came to live with the woman and her son, Mahendra (who, by the way, was one of the first to see Binodini’s photo when she was unwed and up for grabs yet refused her on account of his being “unready for marriage”). Now, when the two arrive the woman’s son and his new bride are in the throes of passion, constantly sneaking off to be alone together; this infatuation does not last long, however, when Mahendra begins to see that his wife’s friend, Binodini, is more his type. The story details the lives of these three and Mahendra’s best friend as they deal with certain issues as distrust, adultery, lies, and numerous fallings-out between them. The movie correctly depicts what Tagore so skillfully wrote and is a sad, stirring tale of the deceit and sorrow that come from being unsatisfied and unhappy.