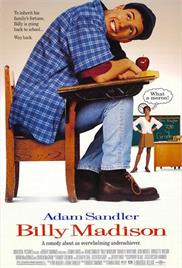 Billy Madison is a 27 year-old man whose father Brian is the head of a major hotel chain. Even though he is groomed to replace his father who is about to retire, Billy is extremely immature and unmotivated in life. When Brian considers making Eric Gordon (whom Billy despises) his new replacement, Billy decides to prove to his father that he is capable of taking over. He must repeat grade school all over again (2 weeks for each grade) in order to take over the hotel empire. The further Billy progresses, the more Eric tries to derail Billy.