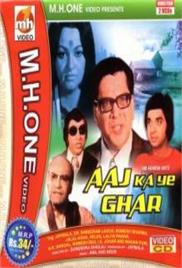 Mala comes from a wealthy family and lives in a palatial house with her dad, a businessman, mother a housewife, and a younger brother. She falls in love with a middle-classed man named Sajjan and wants to marry him, but her father refuses to permit her to do so. She adamantly leaves his house, marries Sajjan and goes to live with his family, consisting of his mother; father, Dinanath, & younger brother, Vijay. The family soon learns to love, respect, and trust her, and she soon runs the entire household. She soon gives birth to a daughter and a son. Vijay completes his education, but is inclined to get involved in get rich quick schemes, and ends up earning a lot of money in a short period of time. When the rest of the family find out that he has obtained this money through smuggling, they ask him to leave the house, which he does and goes to live with a woman named Ruhi, a cabaret dancer. Thereafter the household’s base collapses as Mala’s daughter is killed in an accident; her son falls in bad company and starts gambling and stealing; her husband is arrested for embezzlement and theft; while her father-in-law loses his job. Now Mala can only turn to her Vijay and her father for help – but will they be willing to assist her after all that has happened?